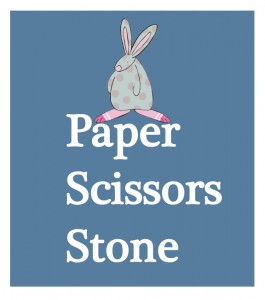 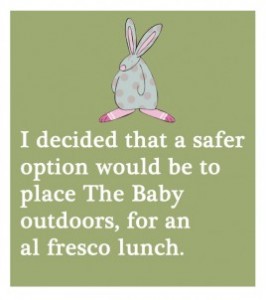 Do you remember the playground game “paper, scissors, stone”? It occurred to me today that I appear to be playing the domestic version of this game. It is called “Dog, Baby, Hens”. Each, in isolation, is a relatively harmless appendage of mine, however, they combine to potentially disastrous scenarios.

The Dog, (an excitable labrador puppy), focuses her excessive licking on The Baby if the latter is at floor level. That in itself would not be a problem, were it not for her penchant for ingesting carrion, and the vague worry that herteethare housed in close proximity to her tongue, and in her exuberance she may forget which to use.

The simple act of preparing lunch today for The Baby involved removing The Dog to a location where she consequently had free reign of the log basket and its contents, and was about to add her dental monogram to slippers, magazines and furniture.

I decided that a safer option would be to place The Baby outdoors, as an al fresco lunch had been decided upon owing to the clement weather. The Baby was safely deposited on a rug on the lawn, where he turned his attention to a handful of grass, the dog toy having been extracted from his mouth.

The moment my back was turned The Hens hoved into view aware that humans provide them with tidbits. The Baby had no such treats about his person, and I was conscious that his eyes are at perfect beak height, and would make a tasty change from the raisins they enjoy. I enticed The Hens out of the way, and returned to find The Baby prostrate on the ground, thrashing and wailing, having become unbalanced; the cause of this display was a hole in the ground dug by The Dog, upon which I had inadvertently placed the rug.

A short while later, a flurry of feathers and a cackling squawk alert me to the presence of The Hens, who I see careering across the yard, hotly pursued by The Dog. The cacophony occurs in proximity to the pram, where The Baby is now sleeping. His slumber is curtailed, and his howls add to the cacophony and maelstrom.

I wonder if a game of British Bulldogs might also be enjoyable this afternoon!