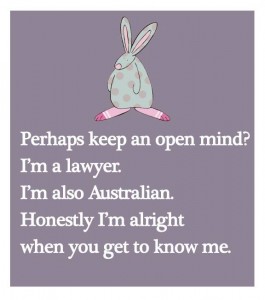 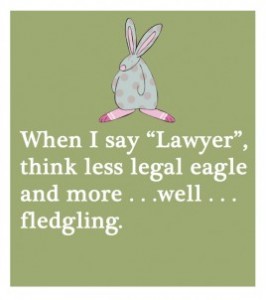 If I’m going to be sharing here then I suppose there are probably a couple of things I should disclose. I’d rather just get it out of the way early as I’m not one for giving people surprises.

I’m a Lawyer. I’m also Australian. Honestly I’m alright when you get to know me.

And while I’m being all open and upfront, when I say ‘Lawyer’, maybe think less legal eagle and more…well….fledgling. I hadn’t seriously thought about law school until a few years ago when I was about to take some time off work. I figured this was the perfect opportunity to set myself up for a career change. I could see all this extra time on my hands. Living in a relatively remote part of the country for the husband’s work, study (mostly online) would be a welcome distraction. I had always enjoyed reading…and according to the husband – arguing. I had it all planned out.

And I also had a two year old and a two month old.

I had this great plan to only study at night or during their nap times. It was a fine plan, provided theyactually napped and/or slept at night AND probably at the same time. Seems I forgot to fill them in on the plan and how this was all going to operate from here on in. Her Majesty wastwo and although sleephad never beenher strong point she was always happy. Unfortunately, neither sleeping nor beinghappy proved to be strong points for Hazard for at least anothertwo years.

That first semester was hard fought but I was two subjects down. YEAH! Only 22 more to go. Um. Yeah.

Sometimes I struggled to implement my own plan, as occasionally even I had to sleep. And maybe feed us and sometimes clean. Unfortunately, even with the blood type caffeine I seemed to have developed, I just did not have the energy my daughter did. Her Majesty seemed to not need any rest. At all.Ever.I was exhausted just spectating. Hazard wanted to be carried for practically every minute of every day.It was either that or he would latch onto my legs which was not conducive to, well, anything really. Surprisingly they really couldn’t have given two hoots about Mummy’s carefully designed schedule and plan or that Mummy sometimes needed to be stationary in order to carry it out, preferably with both arms free, although one would suffice in extreme circumstances (hitting the ‘submit’ button at the last minute).

I cannot begin to tell you how much I wanted to throw it all in at times or hurl myself crying onto the floor, beating it with my fists and feet. Okay. Open and upfront still? I may have actually done that last part a couple times. Also I had dragged someone else into this and he is very supportive and incredibly patient but I think it’s fair to say I owe him (at the very least for whatever unattractive behaviour he may have witnessed).

And then it was almost all done. Not that it was sudden, more like bit by bit I had chipped away at it – kind of like the part in ‘The Shawshank Redemption’ when he digs out of his cell with a tiny rock hammer. It had beenfive years in the making. By now Hazard was due to start school. A return to paid employment was calling me (soundly suspiciously like the husband) but I’d spent very little time and energy thinking about unnecessary things like actual employment. With no advertised vacancy I emailed my resume, complete with its glaringly obvious lack of experience, to a Partner at a great little firm. Fortunately he said “alright” because I hadn’t devised Plan B.

Study finished on a Friday and I started work the following Monday. Now when I look back it all seems a bit like madness. Irented a flatsixty miles from home and the husband. Easing back into the workforce went a little like: 8am to 5pm, new town, doing a job that University does not prepare you for, generally flying solo on the parenting front, and doing further graduate study for admission to the profession.

After my recent admission I was elated. It meant no more weekends studying and more time with the husband, who seems like a nice person. I started thinking I might even enjoy reading again and I became a bit too excited about catching up on all the movies I’d never even heard of.

Then guilt overwhelmed me. Her Majesty and Hazard were noweight andsix years old. I’d been telling myself I was doing this for them but I wasn’t going to get that time back and what ifI later discovered I’d wasted some of that time? It was a comment from a friend that brought me around, which was said without knowing just how bad I was feeling about it all at that time.

“You’ve taught your children some valuable lessons and you should be proud of that”.

I’d been sobusy educating myself that I hadn’t thought about what it potentially has taught my two, even though it may not manifest until they are much older and able to understand the value of perseverance, the ability to adapt and that most things worth doing rarely come easy. We’ll see.

It’s a good thing that after all of this I do actually enjoy the work (*phew*) as that could’ve been a bit awkward. It’s still a challenge.

Sometimes I envy those colleagues who can work later if needed or who don’t have to conjure up meals for small but harsh food critics after a long day at work. Or kick off the working week by trying to convince asix year old to get into uniform when his rendition of “Wrecking Ball” is providing him with exactly the reaction he was seeking.

Maybe I have the advantage? I’ve been settling disputes and negotiating mutually satisfactory agreements for years and all before breakfast.

Nonetheless, these days work doesn’t seem such a tough gig when I remind myself of all of that. That and the fact I get uninterrupted coffee at my desk… Pfftt..I’ve so got this.